It’s time for a little glitz and glamour on the red carpet, as we welcome a new Disney Princess into our ranks !

As you can no doubt see here, my Christmas preparations have taken somewhat of a backseat, in favour of another big exciting family event. But that’s because Disney’s new animated Princess movie, Moana, opens in UK cinemas TODAY … Yay !!
Ruby and Emma were VERY excited about celebrating the arrival of this newest addition to the Disney royal clan. After all, Mummy is a Disney Princess herself, hey. I mean, I know that technically Moana doesn’t consider herself a Princess, claiming she’s just the chief’s daughter an’all. But the same can also be said for Pocahontas if you think about it, so if she’s classed as a Princess, then so is Moana in my books.
But anyway … With this in mind, the girls wanted to get all dolled up and mark this BIG movie launch in true ‘Hollywood’ style, with our own red carpet event … Cool, huh ?!
Well, as you can imagine, I was certainly game. Any excuse to get dressed up and I’m in. Mind you, when it actually came down to it, Emmy was a tad shy to begin with, and it took a little coaxing to from Rocky and I to get her to relax, have fun, and actually smile and wave at the camera (Awww, bless !). By comparison however, apparently our rambunctious little toddler, Ruby, was more interested in running up and down the red carpet, than actually posing for a photo. But at least she enjoyed herself, they both did in the end … Kids, hey !
As for the movie itself though … It was FABULOUS fun for the whole family, but is seems that the girls now want a pet pig and chicken after seeing Pua and Hei Hei … Groan !! Let’s hope I can quickly dissuade them from that one, hey.
All in all, I’d say it’s certainly got the potential of being another classic … So from one Disney animated princes to another, welcome to the family, Moana !!
#DisneyDoll #EllaDisneyDoll #DollStory #ToyStory #Cinderella #FashionDoll #Barbie #Doll #Ella #HollysDolly #Moana #RedCarpet
You can check out my blog about my life as a Disney doll, including many many photos of my adventures, on my facebook page here … https://www.facebook.com/EllaDisneyDoll/
© www.Hollys-Dollys.co.uk
Posted by Unknown at 04:38 No comments:

The BIG countdown has begun … 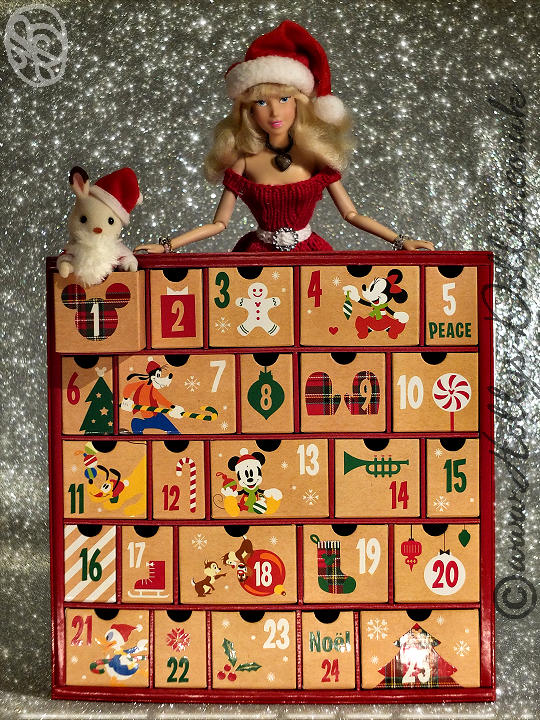 If you hadn’t already realised, it’s the 1st day of December today. Blimey where has the year gone ? … But anyway, with the start of this festive season, it can mean only one thing. It’s time to open those advent calendars, as the countdown to Christmas begins !
Are you all geared up, raring to go, and in the holiday spirit ? … No, I haven’t totally got there yet either. But with the help of a Santa hat, and a twinkling of seasonal magic, I’m certainly feeling the embers of some warm festive fuzzy’s starting to glow within. So let’s open up door number one of the calendar and get this Christmas show on the road, shall we …
It’s BEGUN !! …
Only 24 day left and counting … Eeeek, I dunno about you, but I have SO much to do if I’m gonna be ready on time. Including getting my little dolls-house home all spick ‘n’ span so that we can put up the tree soon.
So I guess with that in mind, I had better quit all this yapping and get started, hey.
Busy, busy, busy … There is a LOT to get done. However I’ll try to keep you all up to date on my progress as and when I’m able.
24 days to go … Will I be ready ?? … Ummmm ??
#DisneyDoll #EllaDisneyDoll #DollStory #ToyStory #Cinderella #FashionDoll #Barbie #Doll #Ella #Christmas #Advent
You can check out my blog about my life as a Disney doll, including many many photos of my adventures, on my facebook page here … https://www.facebook.com/EllaDisneyDoll/
© www.Hollys-Dollys.co.uk
Posted by Unknown at 06:30 No comments:

Spare a mere 2 minutes in remembrance today, to honour ALL those brave men and woman who have paid the price for our freedom. 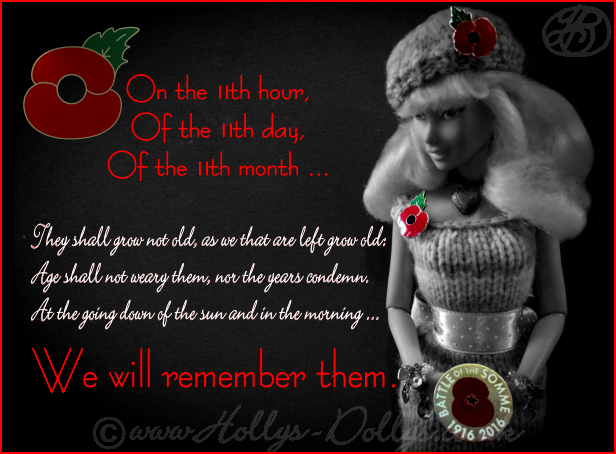 On the 11th hour,Of the 11th day,Of the 11th month …
“They shall grow not old, as we that are left grow old:Age shall not weary them, nor the years condemn.At the going down of the sun and in the morning
We will remember them.”
#DisneyDoll #EllaDisneyDoll #DollStory #ToyStory #Cinderella #FashionDoll #Barbie #Doll #Ella #RemembranceDay #TwoMinuteSilence
You can check out my blog about my life as a Disney doll, including many many photos of my adventures, on my facebook page here … https://www.facebook.com/EllaDisneyDoll/

Are you ready for an evening of mischief and fun ? … Meooow !! 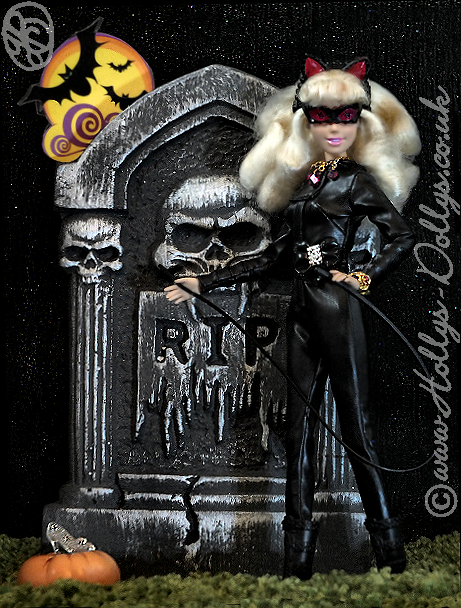 Happy HALLOWEEN Everyone !
Love from,

).
#DisneyDoll #EllaDisneyDoll #DollStory #ToyStory #Cinderella #FashionDoll #Barbie #Doll #Ella#Halloween
You can check out my blog about my life as a Disney doll, including many many photos of my adventures, on my facebook page here … https://www.facebook.com/EllaDisneyDoll/
© www.Hollys-Dollys.co.uk
Posted by Unknown at 09:33 No comments: 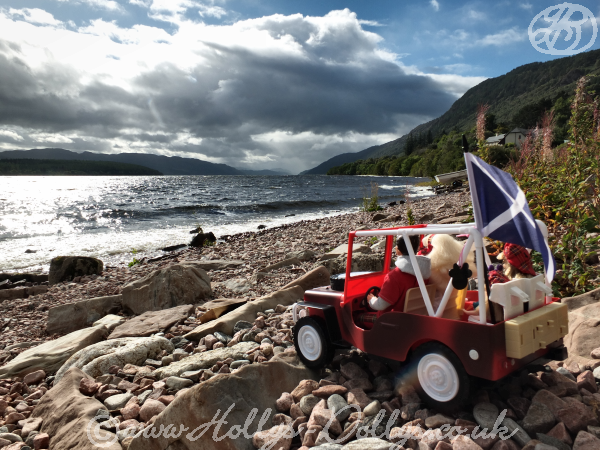 The “McRocky” Family’s Scottish Highland Holiday 2016.
It seems that the final day of our Scotland vacation was upon us in no time at all, and it was a day filled with both joy and sadness at that. Mostly from knowing that our holiday was drawing to a close … Awwww. But we still took full advantage of the time we had left none the less, by visiting the ever so fairytale-esque Cawdor Castle (Unfortunately we were unable to get a photo of us there to show you all, but we certainly enjoyed the excursion a great deal all the same). If you’re inclined though, you can check it out for yourselves on their website here … www.cawdorcastle.com.
Anyway …
Having finished our little expedition, upon our return to Lochend, we were suddenly overcome with the slightly melancholy realisation that THIS was our last chance to enjoy the fantastic view of Loch Ness, which we’d found SO captivating during the course of our stay. You see, we were planning to start our journey home at 4am the following morning. So in all honesty, we wouldn’t get another opportunity to see the loch again once the sun had set on this very day … Awwww, so sad.
We therefore quietly parked on the shoreline for a short while, taking in the sight, sounds, and sheer wonder, of this world famous marvel of nature before us … Mmmmmm !
Sadly however, all too soon it was time to return to the holiday cottage, to start packing for that impending big long drive ahead of us … As we watched the light continuing to fade on our Highland holiday though, whilst it was undoubtedly a somewhat sad atmosphere, I think each and every one of us felt incredibly lucky to have been given the experience of this amazing week away in Scotland none the less.
Whilst we have no idea if we’ll ever return here, who knows what the future holds, hey ? But for now, it seems all good things must come to an end after all.
So with a heavy heart, it’s high time that I signed off from our Scottish vacation, bringing these holiday updates to a close at last. I hope you’ve enjoyed following my daft dolly experiences up here, however it’s now time to return home …
Guidbye, and hae a guid journey !
Love from,
Ella x
#DisneyDoll #EllaDisneyDoll #DollStory #ToyStory #Cinderella #FashionDoll #Barbie #Doll #Ella #LochNess #Scotland
You can check out my blog about my life as a Disney doll, including many many photos of my adventures, on my facebook page here … https://www.facebook.com/EllaDisneyDoll/
© www.Hollys-Dollys.co.uk
Posted by Unknown at 07:54 No comments:

** Bags of Fun ? Must mean it’s time for some girly shopping in tantalising tartan – Apparently the human overlord had the same idea as well ! ** 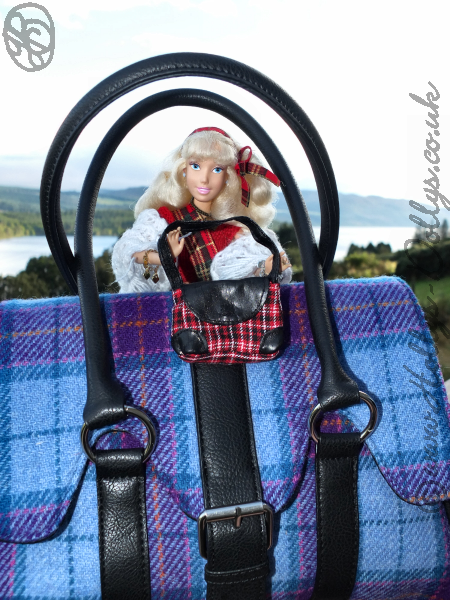 The “McRocky” Family’s Scottish Highland Holiday 2016.
As our Scotland vacation was now drawing to a close, there was certainly a sense of melancholy starting to build … It’s almost over, how sad. But, it seems there was still a wee bit of time left for somewhat of an indulgent splurge on last-minute holiday souvenirs none the less … Oh GOODY !!
Something GIRLY at last !! … And it’s not like Rocky could complain after he dragged me onto another steam train yesterday.
I could almost HEAR all the retail outlets calling to me. This was most definitely my chance for something frivolous, feminine, and just for me. But what would I buy ?
Well …
Much to my surprise, as you can see here, the lord and master had a similar idea in the end … Because after hitting the shops, it seems we BOTH came home with lovely new tartan handbags to show for our retail therapy efforts. What a funny coincidence, hey ?
But aren’t they FABULOUS ?! … Mmmmmmm.
What lovely souvenirs for us both to remember this amazing Highland adventure of ours with … Speaking of which, my next instalment will sadly be the final update charting our Scotland exploits … Awwwww.
For now however, I’ll simply say … See you next time.
Love from,
Ella x
#DisneyDoll #EllaDisneyDoll #DollStory #ToyStory #Cinderella #FashionDoll #Barbie #Doll #Ella #LochNess #Scotland
You can check out my blog about my life as a Disney doll, including many many photos of my adventures, on my facebook page here … https://www.facebook.com/EllaDisneyDoll/
© www.Hollys-Dollys.co.uk
Posted by Unknown at 04:02 No comments:

** All aboard !! – As we take a bonnie train ride through the Scottish Highlands ! ** 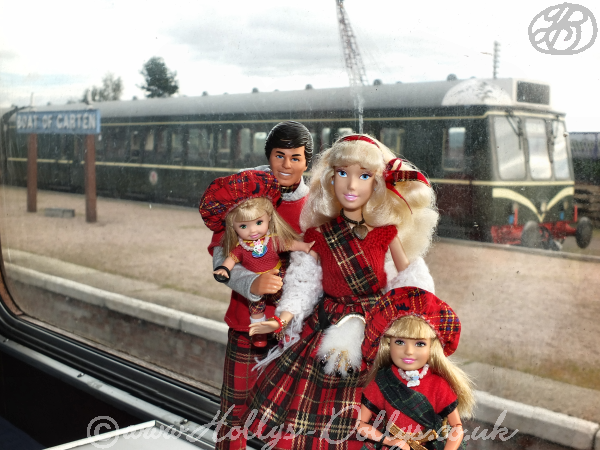 The “McRocky” Family’s Scottish Highland Holiday 2016.
Considering the fact that my handsome hubby is a HUGE train lover, I guess it will come as NO shock to you all that Rocky suggested an outing on yet another steam train during this vacation of ours … Groan !! Not again ?!
But anyway …
The Strathspey Railway was the first line to come to the heart of the Scottish Highlands, back in the mid 1800s, and they’re still running steam trains through the stunning surroundings of the Cairngorms National Park even today ! … So how could my dearly beloved possibly pass up an opportunity like that ?
He couldn’t of course … So bright and early one morning we set off from our Loch Ness base-camp, heading out towards the picturesque mountainous surroundings of Aviemore.
I’m not sure how it happened, but somehow through the course of our journey, time had gotten away from us. In fact, when we arrived at the station we literally only had a few MINUTES before the train was departing … QUICK !!
It was all a bit of a blurry rush, what with getting tickets sorted, trying to board the train and whatnot. But we were still somewhat taken aback none the less, when we climbed into the last carriage in haste, only to discover that it was completely empty … Ooooh-errrr, hey !!
So in essence, we had a carriage all to ourselves, AND the pick of any seat we wanted during the 90 minute round trip. Which stopped at the stations of ‘Boat of Garten’ (Seen here), and ‘Broomhill’, before returning back to our starting point at ‘Aviemore’.
It was lovely watching the scenery pass us by, in a bit of a blur, as the engine chuffed up and down the line, hauling its many carriages. But from my own point of view, my favourite moment of the day was seeing the smiles this outing had brought to the faces of my husband and daughters … Awwww.
That alone made the whole thing worthwhile … But I still couldn’t help but HOPE that perhaps we might manage at least ONE thing that was a wee bit girlier, and more MY style, before the holiday was through.
Did I manage that though ? … Sorry, but you’ll have to wait until another day to find out the answer to that one, wont you …
Until my next holiday update then, my lovelies.
Love from,
Ella x
#DisneyDoll #EllaDisneyDoll #DollStory #ToyStory #Cinderella #FashionDoll #Barbie #Doll #Ella #LochNess #Scotland
You can check out my blog about my life as a Disney doll, including many many photos of my adventures, on my facebook page here … https://www.facebook.com/EllaDisneyDoll/
© www.Hollys-Dollys.co.uk
Posted by Unknown at 07:41 No comments: